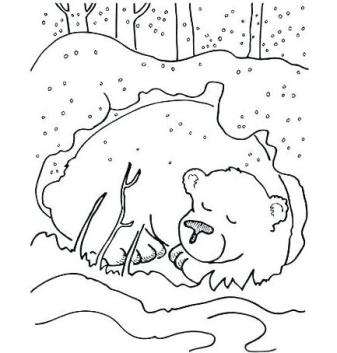 A scratching came from outside the cave. Then a whimper, and finally, a yowl. “ AAAAArrrrrf!”

I slowly opened one eye, then the other, and stretched my paws. What could be making that noise?  It wasn’t even March and I usually hibernate until April when the incessant bird chirping wakes me.

Finally, I crawled in the direction of the sound, pushed aside the leaves and twigs hiding the entrance to my cave and . . . there lay a trembling half-grown white bulldog puppy covered in cuts and scratches with a half-torn ear hanging over his eyes. Against my better judgement, I brought him into the cave and warmed up some fish soup.

That was my first mistake. As the puppy guzzled down the soup, he stop shivering and between guzzles and slurps began to tell me his story. I listened and that was my second mistake. Charlie had escaped from a dog-training farm where big men carrying chains and whips beat the puppies until they became so mean they would attack anything that moved. Then each puppy had to take a fighting test. Puppies who refused to fight were used as bait for other dog fights, or killed.

So, when Charlie’s cage door was left unlocked one day, he ran as fast and far as he could. Not knowing where to go, he wandered through the woods for days until he literally bumped into my cave.

That’s when I made my third mistake; I told Charlie he could stay with me for a few days while his wounds healed – just until I could find him a permanent home or figure out what a bear does with a puppy.  That was two years ago and I haven’t had a decent winter’s hibernating since. Don’t get me wrong, I’m not sorry I helped Charlie, but raising a puppy is hard work and bears require a lot of sleep. Speaking of sleep, let’s take a nap and then I’ll tell you the rest of the story.

What? You aren’t sleepy? Ok, back to my story.

First Charlie and I shared the cave, sleeping most of the winter, only venturing out to find food and explore the forest, always careful to avoid contact with hunters or men in pickup trucks with dog crates. Soon, we became best friends and partners – sharing everything. But, Charlie was growing, which meant he was hungry all the time, so I taught him how to fish and forage for berries. In turn, he was supposed to be very quiet and let me sleep. But, in reality Charlie was a rambunctious little creature who kept me awake with his constant bouncing and whimpering.

By Spring, we were both awake and Charlie showed me some tricks he learned from the older dogs at the kennel – sit, stay, beg, lie down. But the greatest trick Charlie taught me was how to become invisible. You see, Charlie’s greatest fear was being captured and sent back to the farm. Every time he heard people sounds he closed his two eyes, shook his tail until it was just a blur, then turned round and round three times and shrank into his pillow where he slipped through the inside-out-hole.  The first time this happened, I freaked out, but Charlie explained that the inside-out-hole led to a safe space where he could watch without being seen. A place where humans are not allowed.

What is the inside-out-hole? Well, that is a story for another day.

Currently as Associate Professor of English Emerita my focus remains committed to scholarship within a multimodal / multicultural context. My ongoing research projects are The Virtual Caribbean Library and the Lost Voices, Forgotten Voyages projects; both centered on digital representations of the Caribbean within a digital humanities context. View all posts by creoleana